My apologies for neglecting you all for the past near-two weeks.  Lots been going on, to say the least.  Since I have so much to catch up on, I’ll try to write some more succinct posts (no guarantees though…) over the next couple days so I can update you on all that’s been going on at Satis House.  I’m also going out of town next week, so I may try to write a bit while I’m away, but it’s likely that I’ll have another slew of posts to throw at you once I return to SH.

So, let’s cut to the chase–the raspberries are in!  Or at least, coming in, slowly but surely.  Last week the mercury leapt up into the 90s [heavy sighhhhhhhh, I guess it’s June in Boise……..], and suddenly, there were red ripe raspberries on my bushes!  I picked these first three (see picture below) and had to slap my hand away from picking ones that weren’t quite ripe–weren’t springing from the vine when I tugged at them.  As I sat out on my rocker, enjoying my patio and the marvel of homegrown berries, I listened to many bird songs coming from my big tree.  With all the yard waste that is piled up there, tons and tons of birds have been hopping about and singing their sweet songs morn and eve.  My neighbor Susan said that my piles of brush were perfect quail habitat, and what do you know–indeed, I have quail now!  But, as much as I love all my little birdies, I was none too impressed when just as I was thinking about how much I love the birdsong, a robin swooped down, di-rectly into my raspberry bush, and distinctly “plucked” an UNRIPE pink berry from the vine, and then proceeded to fly away with it in its mouth.  I know.  I was seriously offended.  My mouth was actually agape, and I *may* have whispered under my breath, “You bastard….”  And the only thing that made me feel better was knowing that the berry wasn’t even ripe, so it couldn’t have tasted that good…

It did make me laugh, though, thinking of that great scene from Spaceballs where the computer gets jammed, and Dark Helmet wipes his finger across the screen and exclaims, “Raspberry!!!”  (Get it–“jammed”–raspberry, like raspberry jam, ha ha ha……) 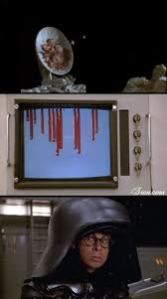 There’s only one man who would dare give me the raspberry: Lone Starr! 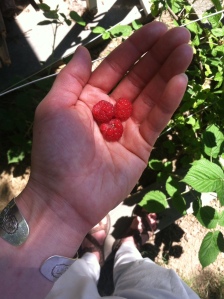